The global trend towards increased urbanization, coupled with the impacts of climate change, has generated renewed efforts to understand how the structure and composition of the urban landscape affects local climate. The CzechGlobe has started as a part of the UrbanAdapt project a complex research effort using airborne remote sensing techniques in order to analyse the impact of city structure on the thermal behaviour, principally the role of vegetation in the thermal regulation of streets.

Two airborne data sets were acquired: hyperspectral data using CASI, SASI and TASI sensors (ITRES, Canada) and Lidar mapping using a Riegl 680i instrument (RIEGL, Austria). The thermal data were acquired on two occasions: February 2015 for winter season and July 2015 summer season. A laser scanning data-set was acquired on September 2015 with a point cloud density of approximately 15 points/m2. Surface temperature was retrieved from the thermal hyperspectral data by applying a temperature-emissivity separation algorithm. The 3-D structure of the city was classified from the laser scanning data; we distinguished three main classes: bare land, buildings and vegetation. The first results of the analyses will be presented at Prague Congress ISPRS 2016 (ID 1022) and a few examples of airborne images can be found at the webpage of the UrbanAdapt project 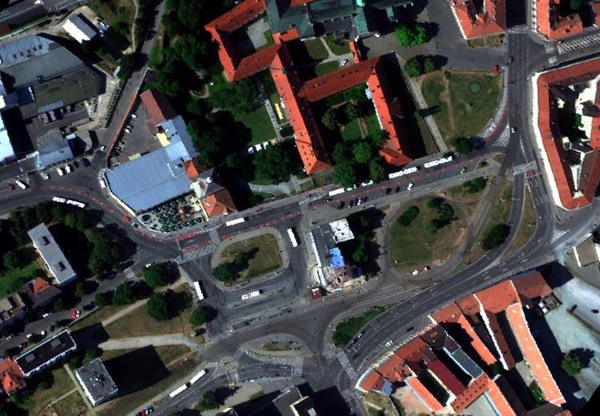